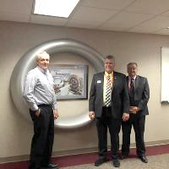 New Berlin Mayor, David Ament, and Chamber of Commerce President, Gary Szpara recently visited the Spincraft WI plant. Ament and Szpara met with General Manager, Gary Frey, to learn about Spincraft manufacturing capabilities and how they are utilized to solve unique challenges for the various markets served by this plant. The visit was highlighted by a tour of the 100,000 sq foot factory to see first-hand several of Spincraft’s critical components and assemblies in production.